Home / Who we are / Our Origins

A wide range of ethnicities and geographical locations there may be, but thankfully Brazilians find no divisions between them.  Brazil is a world away from Hong Kong, but when I landed there at the age of five it became my world.  São Paulo as a city nurtured me until it was time for me to attend university in the United States, and I left the country with deep impressions as if it were my birthplace.  Life has taken me by the hand and led me far from it since then, from the States to England, and finally here to Monte-Carlo, but throughout I kept that majestic though often precarious country close to my heart.

It was in Monaco, through introductions by Jean Jacques Wigno and Michèle Castellini, that I crossed paths with Padre Valdir Formentini of the Eglise Saint Charles de Monaco - a Roman Catholic priest from Brazil.  He was about to return home to engage in charity work and the social development of his parish of Santa Isabel, more specifically to support the education of its disadvantaged children.  The importance of his work touched me, and I knew that it was my opportunity to support a community I knew to be genuinely in need.  This was in 2004, and by 2006 Association Accademia was established, with Padre Valdir as its resident ambassador in Brazil.


Between school and home, children in Brazil are often left by themselves in what are all too often dangerous environments.  To address this problem, Accademia has provided support to ASSISTÊNCIA SOCIAL SANTA ISABEL (ASSI) which is led by Padre Valdir.  With grants from Accademia, ASSI now has four new or renovated centres where children may safely spend time before or after school engaged in productive complementary and supplementary educational programmes and outdoor sports activities.   Accademia works also with the Oblate Fathers and the Municipal Government of Viamão in building new class rooms, libraries and computer labs.  And because Accademia believes that help should extend to all ages, it supports programs which aid and fast-track young adults into some of Brazil’s largest and most stable career sectors.

On behalf of us all, I thank you for taking the time to visit our website.   I do hope  you will join our worthy cause. 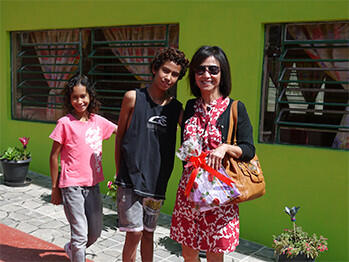